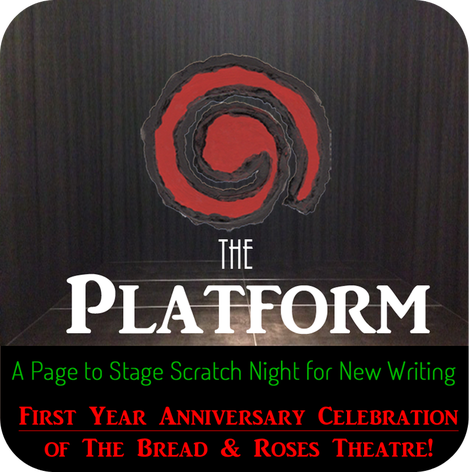 To celebrate the first year anniversary of The Bread & Roses Theatre - launched 1st of November 2014 - exactly one year on the in-house Bread & Roses Theatre Company (BRTC) presents the eighth instalment of their new writing scratch night, The Platform. With a record number of over 500 submissions from writers this is set to be one of the best and most exciting ones yet!

Come and enjoy a fabulous night of new short plays whilst celebrating the successful  first year of The Bread & Roses Theatre. Highlights of the theatre's first year include receiving a 2015 ICWP 50/50 Applause Award, launching the Clapham Fringe Festival as well as Playwriting and Emerging Theatre Company Competitions; all whilst having welcomed over 70 theatre companies on a pure box-office split basis, without charging any upfront hire fees, and establishing a place for the venue on the London fringe!

The Platform has been running regularly since October 2012 and has quickly established itself as an opportunity to discover, develop and explore new short plays and monologues for audiences as well as creatives. As the original project that triggered the eventual launch of The Bread & Roses Theatre, The Platform also returns for its first year anniversary!
​
★★★★ “One to watch and keep on watching" - Remotegoat on The Platform
"one of the strongest short work platforms in  London" - Onomatopoeia on The Platform
★★★★★    The BRTC has also earlier this year presented a 5 star reviewed (femalearts & Remotegoat) new adaptation of Miss Julie.

Dee Sanders, a station announcer, sees a man who is hovering too near the edge of the platform. Afraid that the man is contemplating suicide, she invites him into the station announcer's cabin.​

Red Book, Blue Book  by Kit Walkham
​Directed by   Kasia Różycki, with Tessa Hart & Natasha Jacobs
​
As 6 year old Kristina talks to a doll given to her by her absent father, her fears for their future are exposed.

​A chance encounter with her ex prompts Aine to embellish the truth a little. But as they keep on meeting, her lie takes on a life of its own.

Learning to Fly  by Simon Jagger
​Directed by Laura Jasper, with Lydia Lane & Shala Nyx
​
Amira and Shaznay meet on London Bridge. The night train to Gatwick leaves in 15 minutes. Will Amira give up everything for her friend? Will she run back home or run away to Syria?

Schrödinger’s Cat  written & directed by German Munoz
with Elizabeth Guterbock & Anna Frankl-Duval
​
​Mabel walks in to her apartment thinking she’s been burgled but finds Donna, her ex, with a strange metal box. And she can’t find her cat.

​A young woman finds herself homeless in London and turns to prostitution.​